Joseph White Latimer was born on August 27, 1843 in Oak Ridge, Virginia. He attended the Virginia Military Institute, where he studied artillery tactics under Thomas Jackson. 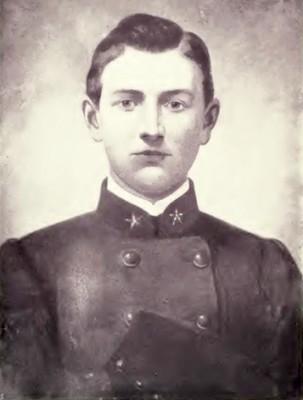 Latimer was in his second year there when the war broke out in 1861. He was one of several VMI cadets selected to serve as drill instructors in Richmond, where he trained the Hampden Artillery. He was commissioned Second Lieutenant that September to serve in his cousin Captain A.R. Courtney’s artillery battery.

In 1862 he served in in General Ewell’s Division in Jackson’s Shenandoah Valley Campaign, fighting at Winchester, and at Cedar Mountain. In August Courtnety took over the battalion and Latimer was promoted to captain and took over the battery, commanding it at Sharpsburg and Fredericksburg.

In March of 1863 Latimer was promoted to major and was made second in command of Richard Snowden Andrew’s Artillery Battalion in General Edward Johnston’s Division. His corps commander, Richard Ewell, referred to him as “the young Napoleon,” but everyone else knew him as “the boy major.”

In June Andrews was wounded in the fighting around Winchester, Virginia on the march to Pennsylvania, and Latimer took over command of the battalion.

On July 2 at Gettyburg Latimer’s battalion of artillery was sent to Benner’s Hill to support a Confederate attack on East Cemetery Hill. It was a difficult position, small and exposed, but the only one available. Latimer did his best to keep the guns in action in the face of heavy Union counterbattery fire. Finally he requested permission to withdraw his batteries (see monument at Gettysburg).

Permission was granted, though he was asked to keep four pieces in action on the hill. It was while he was directing the fire of these guns that Latimer was wounded by an exploding shell which also killed his horse, which collapsed on him. His arm was amputated and he was removed to Winchester. When Federal troops threatened to capture that city he was moved farther up the Shenandoah Valley to Harrisonburg, Virginia. Gangrene set in, and Latimer died on August 1, a few weeks short of his twentieth birthday.