Micah Jenkins was born on December 1, 1835 on Edisto Island, South Carolina. He graduated first in his class from the South Carolina Military Academy (The Citadel) in 1854, then helped organize the King’s Mountain Military School in Yorkville, South Carolina. Jenkins married and the couple had five sons, Michah John on July 3, 1857, Robert Flavel in 1858, William Edward in 1860, Whitemarsh LaRoche in 1861 and John Murray in 1863. 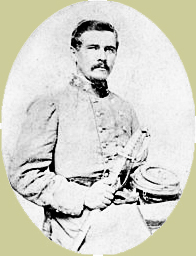 At the start of the war Jenkins helped raise the 5th South Carolina Infantry and on April 13, 1861 became its colonel. He commanded his regiment at the First Battle of Manassas in the brigade of David R. Jones.

With the reorganization of the army in the spring of 1862 he left the 5th and formed the Palmetto Sharpshooters, a regiment made up of men who transferred from his old and two other South Carolina regiments.

On July 22, 1862 Jenkins was promoted to brigadier general. He was badly wounded at the Second Battle of Manassas, shot in the chest and arm. He returned to command in 1863, and took part in Longstreet’s Suffolk Exedition. Jenkins and his brigade were transferred from Pickett’s to French’s Division in an attempt by Longstreet to put Jenkins in command of the division. After a brief resistance by French it worked, to some extent, as French was often involved in other activities and left Jenkins in charge as senor brigade commander.

This, however, resulted in Jenkins and his brigade staying behind in the Richmond area when the First Corps returned to the Arm of Northern Virginia and embarked upon the Gettysburg Camaign.

That fall Jenkins’ brigade rejoined the First Corps and accompanied it when it was transferred to the west. At the Battle of Chickamauga Jenkins took command of his division from the wounded John Hood. Longstreet urged Jenkins’ promotion to permanent command of the division, but in October President Davis decided the issue in the favor of Evander Law.

Jenkins returned to brigade command, and the First Corps returned to the Army of Northern Virginia in the spring in time to meet Grant’s spring offensive. On May 6, 1864 Jenkins was commanding his brigade in the Battle of the Wilderness. Riding ahead of his men on a reconnaissance with Longstreet, both men were wounded by friendly fire in almost the same location and circumstances as Jackson during the Battle of Chancellorsville. Shot in the head, Jenkins in his delirium kept rallying his men. He died a few hours later.

Micah John Jenkins served in the Spanish American War in the First United States Volunteer Cavalry Regiment, the famed “Rough Riders,” reaching the rank of major. He died in 1912.