Turner Ashby, Jr. was born on October 23, 1828 on Rose Bank Plantation in Fauquier County, Virginia. His father had been a colonel in the War of 1812 and his grandfather a captain in the Revolution. Turner’s father died when he was young and he was raised by his mother and given a private education.

Ashby was a farmer, businessman and a noted horseman. He unsuccessfully ran as a Whig for the Virginia legislature and formed a company of militia cavalry. The company guarded Charles Town during the trial and execution of John Brown in 1859. 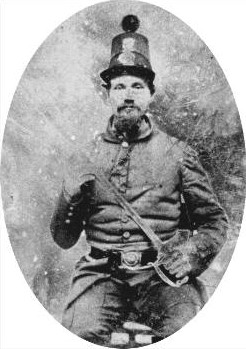 The War Begins – From Militia Captain to Cavalry Colonel

When Virginia seceded from the Union Ashby led the militia to capture the United States Arsenal at Harpers Ferry. He and his men were assigned to the command of Colonel Thomas J. Jackson and were engaged in guarding the bridges and fords over the Potomac.

In June Ashby’s brother Richard was killed in a skirmish near Harpers Ferry. There were rumors that he had been bayoneted while trying to surrender, and after Turner viewed the corpse he was convinced. This hardened Ashby’s hatred against the North.

Brigadier General Joseph Johnston appointed Ashby lieutenant colonel of the 7th Virginia Cavalry on July 23rd, 1861. Ashby exercised command of half the regiment due to the illness of its colonel, Angus Macdonald, and after Macdonald retired in February of 1862 Ashby was promoted to colonel the following month.

For the next four months Ashby led his cavalry in ‘Stonewall’ Jackson’s Valley Campaign. While Ashby’s reconnaissance and screenng were vital elements in Jackson’s success it was balanced against a lack of discpline among his men that could be very costly. At the First Battle of Kernstown Union General Banks’ army was able to escape because Ashby’s men were unavailable to cut off their retreat, instead plundering captured supply wagons.

The glamor and easy discipline of Ashby’s cavalry attracted many recruits, and soon his command included 27 companies, almost three times the size of a normal regiment. Jackson tried to reduce his command by transfering away some of the excess comppanies, but backed down when Ashby threatened to resign.

The lack of discipline among Ashby’s men combined with his lack of formal military training that caused Jackson to resist and then withold Ashby’s promotion to brigadier general. It finally came through on May 23, and Ashby celebrated in a ceremony at the Taylor Hotel in Winchester, Virginia. However, the promotion had not yet been ratified by Congress, and never would be. Technically, Ashby was still a colonel.

Two weeks later on June 6 Ashby was covering the withdrawal of Jackson’s main force as it moved to get between two pursuing Union forces. At the Battle of Good’s Farm (also known as the Battle of Harrisonburg) Ashby fought off an attack by the Frist New Jersey Cavalry, then engaged the 13th Pennsylvania Reserves. Ashby’s horse was shot and went down but Ashby lept up and continued to lead the charge on foot calling, “Forward, my brave men!” He only ran a few steps farther when he was shot through the heart.

Jackson wrote a eulogy of his cavalry chief. “As a partisan officer I never knew his superior; his daring was proverbial; his powers of endurance almost incredible; his tone of character heroic, and his sagacity almost intuitive in divining the purposes and movements of the enemy.”

Grave of Turner Ashby in Winchester

Ashby was originaly buried at the University of Virginia Cemeter but in 1866 his body was moved to the Stonewall Confederate Cemetery in Winchester, where he lies next to his brother. Several markers in Harrisonburg direct the traveler to the monument at the location where he was killed. 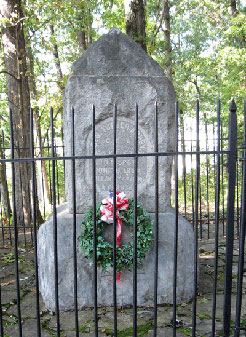 Monument to Turner Ashby outside Harrisonburg