William S.H. Baylor was born on April 7, 1831 in near Stainton in Augusta County, Virginia. His father, Jacob, had been a judge and owned a large farm. William attended Washington College in 1847 at the age of 16 and graduated with honors in 1850. He then went on to study for three years at the University of Virginia, where he earned a degree in law. 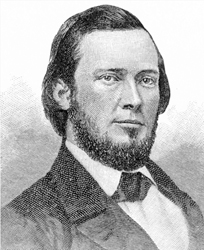 Baylor took up a law career in Staunton, and in 1857 was elected Commonwealth Attorney for Staunton. He was elected Captain of the West Augusta Guards, a local militia company.

Photograph of William Baylor in the uniform of his miltia unit, the Augusta Guards

Maylor married Mary Hawes Johnson in October of 1859 and was on his honeymoon in New York City when he contracted typhoid fever.

With the coming of the war in April of 1861 Baylor became Colonel of a collection of militia companies who marched to Harpers Ferry. When the companies were organized with others into the Fifth Virginia Infantry Regiment Baylor became major.

Baylor fought at the First Battle of Manassas (Bull Run).

When the Fifth’s Colonel Harper resigned in September to be with his dying wife 27 officers signed a petition to make Baylor colonel. But the colonelcy went to William Harman, a Mexican War veteran. Baylor decided to resign his commission as major, but he stayed on with the brigade on Jackson’s staff as Inspector General. When the army reorganized in April of 1862 Colonel Harman retired, and Baylor was elected colonel of the Fifth Virginia.

Baylor commanded the regiment in all of it actions from the McDowell campaign until Cedar Mountain. His horse was killed under him at Winchester, and he was cited for bravery several tmes during the Seven Days battles. During this time he was described as heavy-set, with long hair and blue eyes, and conspicuous in his disregard for personal safety.

After Brigadier General Charles WInder was mortally wounded at Cedar Mountain the officers of the Stonewall brigade petitioned to have Baylor apointed as Winder’s replacement. Jackson agreed, and the appointment was made on August 15.

But Baylor would not survive to have his promotion confirmed. He commanded the brigade in the fighting at Groveton on August 28 and at the Second Battle of Manassas (Bull Run) on August 29 and 30. During the fighting along the railroad embankment on the second day of the battle he saw the color bearer of the 33rd Virginia go down. Taking the colors, he shouted, “Boys, follow me!” and led a counterattack. But he was cut down, killed instantly by a volley as the attack was thrown back with heavy casualties.

William Smith Hanger Baylor was buried in the Hebron Presbyterian Cemetery in Staunton.