Lunsford Lindsay Lomax was born on November 4, 1835 in Newport, Rhode Island. His father was Major Mann Page Lomax, a Virginian serving as an ordnance officer in the 3rd United States Artillery in Newport. Lunsford attended West Point as an at-large cadet and graduated (USMA 1856) with his friend Fitzhugh Lee. 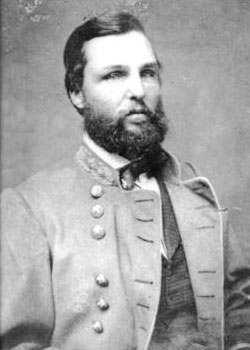 Lomax was assigned to the Second Cavalry, serving on the plains of Nebraska and in Kansas during the Kansas border war. He was a First Lieutenant when he resigned on April 25, 1861 and quickly became a captain in the Virginia militia. He served as adjutant general on the staff of General Joseph Johnston, then served in the Western Theater on the staff of Benjamin McCulloch. After McCulloch was killed he served on the staff or Earl Van Dorn with the rank of lieutenant colonel.

On February 8, 1863 Lomax returned to Virginia and was appointed colonel of the 11th Virginia Cavalry Regiment in W.E. Jones’ Cavalry Brigade, which he commanded through the Gettysburg campaign. In the reorganization of Stuart’s cavalry in September of 1863 he was promoted to brigadier general, with the effective date of July 23, 1863. He was given command of a brigade of cavalry in Academy classmate Fitz Lee’s Cavalry division which had been organized from three regiments (the 5th, 6th and 15th Virginia Cavalry) taken from three other brigades.

He commanded the brigade in the fighting from Culpeper Court House through the Overland Campaign in 1864, showing skill and gallant leadership. This earned him promotion to Major General in August of 1864.

Lomax was given command of a division of cavalry in Jubal Early’s Army of the Valley, leading it through the Battle of Monocacy and the battles of Third Winchester, Fisher’s Hill and Cedar Creek. He was briefly captured at Tom’s Brook in October of 1864 but escaped after overcoming his guard.

After Early was removed from command of his was worn down and virtualy annihilated army on March 29, 1865 Lomax was given command of the Shenandoah Valley. At the end of the war his small command made its way to General Johnston in North Carolina, where he surrendered at Greensboro.

After the war Lomax farmed around Warrenton, Virginia. He married Elizabeth Winter Payne and the couple had two daughters, Elizabeth and Anne. He became President of the Virginia Polytechnic Institute in 1889. He served as a clerk in the War Department, editing the Official Records of the War of the Rebellion and serving as a commissioner of Gettysburg National Military Park.